Meeting Aline Shader, the Composer: An Interview with Jonathan Kelly 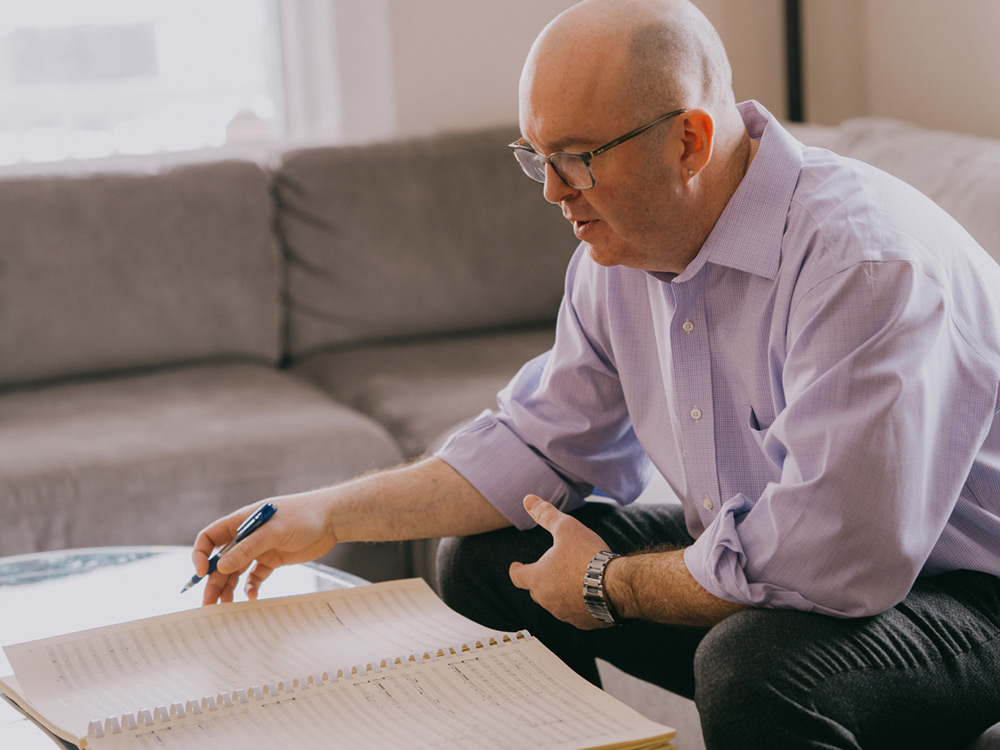 With more than 200 songs and over a dozen musicals, Aline’s body of work made a splash in the highly regarded community from Jazz at Lincoln Center, gaining the attention of numerous musicians in the scene including Jonathan Kelly, a notably busy professional.

Jonathan has extensive experience reading between the lines on the staff to transform sound into written music and vice versa. He has spent more than 20 years transcribing the music of Wynton Marsalis, refining the great skill of translating complex arrangements into readable notation. Through his work as music supervisor for Marsalis, Jonathan travels extensively and works with many of the top musicians in the world at Berklee Performance Center in Boston. To put it plainly, Jonathan has an ear trained to hear it all.

When first asked by bassist Carlos Henriquez to collaborate on a project arranging Aline’s songs for big band to be performed by the Jazz at Lincoln Center Orchestra, the Boston Children’s Chorus, and guest soloists, Jonathan waited to commit because he was concerned about time constraints. After a conversation with Aline’s daughter, he “saw what it really was, and that she was committed to doing a great show.” This led him on a journey into the musical world of Aline Shader–a place that is joyous, sincere, and full of compositional brilliance.

In addition to helping arrange Aline’s songs for the big band concert, Jonathan also worked to standardize and edit her sheet music for nearly 45 songs. Aline hand-wrote every single note and lyric onto paper, which was formerly transcribed into the digital realm, and is now edited and standardized by Jonathan. He was also asked to add chords for guitar or ukulele to make the music even more accessible. The edited selections are now released as fine-tuned sheet music, lead sheets, and lyric sheets for Songs Children Sing.

The craft of composition is something many musicians study throughout their lives, building up their skills in areas such as melody, harmony, and lyric-writing, meticulously designing waves of sound. Aline was not trained in composition or music theory, but she was able to write what she heard by finding the keys on the piano–often a painstaking process that involved handwriting note by note.

Aline began her career in the arts primarily as a dancer, then expanded her reach to become a resourceful educator and published composer. Her compositions were inspired by her experiences and meant to complement the history and literature taught in the elementary school curriculum. Inevitably, they also reflected the times in which they were written, beginning with the 1960s.

While studying dance and pedagogy, Aline’s formal Bachelor’s and Master’s education did not require her to analyze music theory, annotate complex harmonic analyses, or meticulously pick apart ii-V-I progressions. This is important because as Jonathan was getting to know Aline’s sound, he felt that she was able to write down what she heard in her head without immediately placing judgment or technicality on it. Instead, her compositions maintain a sense of musical freedom that some musicians may lose along the way while receiving strict schooling. And while many of Aline’s songs do reflect the general spirit of America at the time, there are ample moments where they stray into something else, creating a sound that’s uniquely hers.

While much of the music she composed is for children, Aline’s harmonies, melodies, and forms are anything but simple ‘kiddie’ music. Instead, Aline’s music is sophisticated and inspires reflection, thoughtfulness, and earnest musicality in performers. Her parts interweave with one another, supported by harmonic progressions that pair eloquently with the melodic motion.

Some of her lyrical content flows as poetry in the form of song like, “I’ve heard rhythms and rhymes very clearly/Melodies of the times I once knew,” from Can’t Stop Singing That Song. When given larger context, the words hold depth similar to what one might find in a classic book or poem.

Take the following excerpt, for example, from Where You’ll Always Be written by Aline in 1994:

And these lyrics from Partners written by Aline in 1978:

Aline’s body of work is profoundly multifaceted. Her music provides powerful experiences for children and adults, alike. It fosters creative, musical, and cultural exploration, and offers a poignant reflection on the human experience.

Imagine what it would be like to sing these songs as a young child, then again as a teenager, and again as an adult. If these were all different people, there’s no doubt each person would interpret the lyrics in their own way. But what if it is the same person revisiting them at different points in their life? 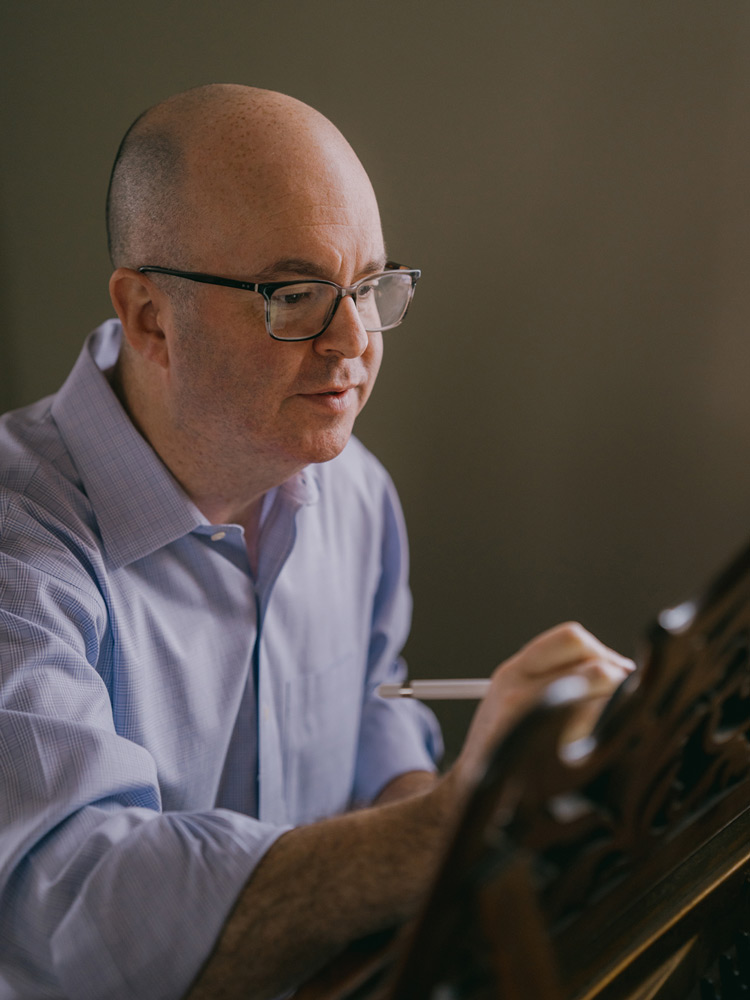 Jonathan noted, without going too deeply into the science of it, that something changes in us between childhood and adulthood. Aline’s lyrics inspire us all to remember what we are capable of and that we can do more together. This sentiment is expertly conveyed through her songs, as they require listening and making music in community with one other. These songs can be used to teach children of any age to both create and embody music.

Excerpts from the Interview

What are some other ways you might be able to describe the music of Aline’s so far… from the chords to the structure of it… can you speak to that?

JONATHAN:
You look at people’s catalogs and music and you think it’s a lot of work to write 40 or 50 songs. Secondly…I’m looking at sheet music and learning about a person…getting to know someone through that music…that’s going to have a much different kind of perspective.

Aline wasn’t classically trained or anything…she didn’t really have notation background and probably didn’t have any theory background or harmony background, which is really cool.

All songs have some basis in historical context. Nobody really comes and reinvents the wheel completely. Music is all related – from Bach to…Batiste. A lot of her songs will have standard chord progressions that probably came out of Tin Pan Alley or Broadway. Some of them have a folk music vibe, but then she’ll use certain chords that she must have naturally heard.

You can create almost all of American popular music with major, minor or dominant 7th chords, and maybe diminished chords once in a while. Jazz and Classical music use “extensions” a lot, but not so much in popular music, so it’s interesting to see and hear the not-so-standard progressions and patterns in Aline’s music.

(Jonathan specifically noted in one piece the use of a G9SUS chord in place of the more common G7 chord for the style, noting that “it’s not really an unfamiliar sound necessarily, but it’s unfamiliar in that kind of music.”)

It’s like listening to Radiohead. I don’t know their music that well, but I’ve heard just enough to notice that they use chord extensions that might not really make sense from a theoretical standpoint, but it might create a cool sound. Aline has some things like that, where she must have just heard that sound in her head.

So, part of my job in working on this was harmonically analyzing and figuring out what she was thinking to create chord symbols for guitar or ukulele in addition to the piano score.

Some people will relate to a beat, but I think harmony is like that too. People might not really understand it, because harmony is the most complicated part of music, but they just naturally hear something.

How is this different for children versus adults?

JONATHAN:
As you get older, the key of a song may be high for your range, or an interval may be a challenge. Kids don’t really know that. Alines songs include some melodic complexity.

When kids sing difficult music, they aren’t intimidated like some adults would be. You can almost hear it when adults get tense when they know that they have to make a big leap or something. The kids don’t think about that.

It sounds like this music written by Aline is unique in that it can be broken down into such simple ideas, but it’s complex when it’s put back together.

JONATHAN:
It’s really good songwriting. It has a universality to it, like it could mean different things. There are definitely some of Aline’s songs where, if there’s a child singing, it has a certain implication, but an adult singing it has a different type of implication. They’re both some type of universal feeling or thought, and I think a lot of really good music is like that.

That’s why people have songs from their childhood that they like, stuff that resonates with you. It might have nothing to do with what the original songwriter was writing about, but it just touches on some kind of universal truth.

Based on just what you know of the catalog so far, how would you describe Aline’s sound or style?

JONATHAN:
We hear things that are a part of American popular music and then your brain relates to those things. It’s deeply subconscious. Aline’s music has a relationship to American popular music, whether it’s folk music or the songs of Tin Pan Alley, but they all have a uniqueness to them. This is the kind of music that has a pulse.

Notation is the closest we can get to a visual expression of sound, what has the process been like for this project?

JONATHAN:
That’s my entire career…how do you represent sound on a piece of paper? I’m putting it into Finale, the computer program, then playing it back in MIDI (Musical Instrument Digital Interface). But, a computer plays back notation exactly. It’s very strict with time. It’s supposed to be a guide.

People are going to interpret this melody in a different way, each person is going to do something different. It’s not really possible to write it 100% accurately for music like this. It’s different when you have orchestral music where you have sections of people playing. There’s a certain level of specificity that has to happen for it to not fall apart. But songs, especially vocal music, are going to be interpreted. This is what this is – it’s imperfect.

It’s very, very open to interpretation, even the harmony. Which is kind of next level. When someone is singing by themselves, they’re going to sing the way that they feel it. That makes you realize what sheet music is.

If more people used Aline’s songs and were engaged with them at an early age, do you feel it could help get Jazz in music education back to that more spiritual, “other-worldly” experience?

JONATHAN:
Yes, I think so. The material is good. It can be presented in a lot of different situations and have a positive effect. You’ve got a collection of songs that are good and they’re good in a variety of ways.